This morning on twitter Orlando Bloom started to trend. Now Bloom is a Lord of the rings icon and a Hollywood heartthrob so you would think it could possibly be regarding one of the two. But by the click of one tweet it showed that pictures of Orlando were leaked of him surfing but naked!!!!! 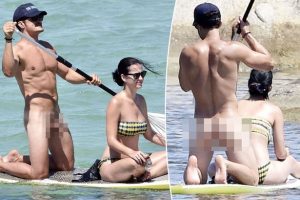 Bloom had no shame in showing his birthday suit. It was more of a private beach but what do you guys think? was it an invasion of privacy or was he asking for it? Let us know